For the discussion of Sparkfun events such as Free Day, Antimov, AVC, etc.

Here one of her more entertaining fights: http://youtu.be/YhOflMhHAuA

Fresh out of the box she looks like this:

She's completely missing a weapon motor, the pulley is in bad shape, and the battery is undoubtedly dead. Over the years she earned many battle scars, especially near the front. Under all the electrical tape "armor" are three speed controllers, two small gear motors, and a micro RC receiver. I doubt many of these particular items are for sale any longer, 10 years is an eternity in hobby electronics. Hopefully they all still work, I don't look forward to finding replacements. I'm looking forward to the event, and am curious to see what other people come up with.

I charged up the battery, weighed in, and gave things a shot. 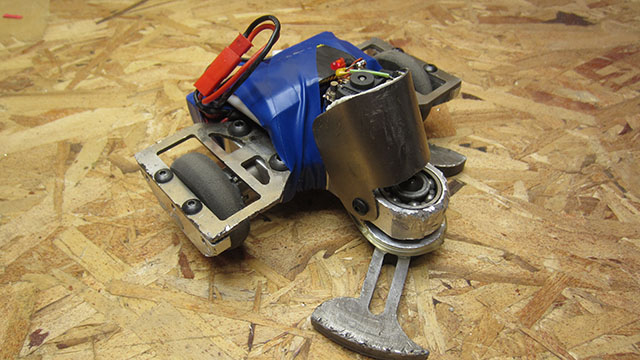 The performance was worse than I remembered. Taking a closer look, I found that my old belt driving the weapon motor was pretty loose. Making a new one (and a few spares) got her back to her scary state.

I'll probably do a bit of practice driving, and figure out something to do with that .8 ounce I have left...

That rotating club (?) has some serious momentum - I love it!
It's not perfection I'm seeking but always a job well done. Enjoy doing fun stuff while you can because we all need a healthy balance, to combat all the necessary serious stuff.

I thought the competition ran smoothly. There was a lot of spectators, it was great to see so many people interested in fighting bots. One complaint I heard from a few people at was that it was too hard to see the action. There were so many people lined up that if you weren't in the first few rows you were out of luck. Maybe bleachers or TVs showing live action? It's a good problem to have.

This competition coupled with the new Battlebots show on Sunday really has me fired up to build a new robot. Thanks Sparkfun for putting this together!

Return to “Sparkfun Promotions and Competitions”