I want to power a device only when my car was moving, here is what I thought of : 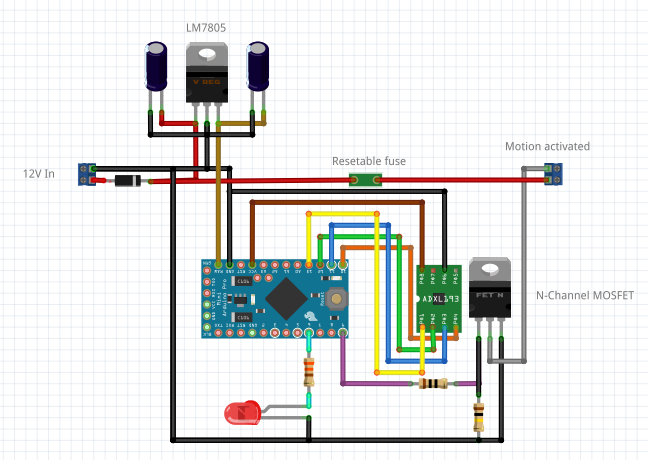 (ignore the ADXL193, Fritzing didn't have Sparkfun's ADXL362 breakout board)

Could you tell me if there's any problem with this circuit ? I'm not very confident about the power/mosfet part.

When moving the (3.3V) Arduino will pull Pin 9 and 6 HIGH, then LOW if there's no movement for more than 10 minutes.
I use a LM7805 because I have it available and think the Arduino Mini Pro will be more than enough to power the LED, ADXL362 and MOSFET.
I know that due to the protection DIODE output voltage will be slightly less than 12V but that's not an Issue (it will be regulated to lower voltages).

It looks as if you're powering the 7805, ProMini and ADXL362 all the time. That has the potential to be a battery killer. How can you (can you?) mitigate this ?

If this is going into a Lexus w/uber soft ride, will it stay on when traveling down a long stretch of highway ? Might a better turn off criteria be thought of ?

The raw "battery" supply in a car can be quite noisy and "spikey". Do you need more filtering and/or some Transorbs ?
http://en.wikipedia.org/wiki/Transient- ... sion_diode

Why not use the onboard regulator of the ProMini ? (saves a regulator)

Is a 'low side' switch appropriate for auto use ? Why not a 'high side' switch and let the device use chassis for the return ? (saves a wire)

I've done tests without the MOSFET and it draws less than 10mA, I tried the LowPower library but it broke my timing code (it dropped the current needs to 4mA) so it was a no-go so far. Compared to the humongous power reserve in my Car battery it really isn't a concern. The ADXL is very low power to start with, but there's room for improvement. I also read about Rocket Scream low power pro minis and it may help to squeeze a few more mA. I also tried to put the arduino to sleep and only wake it up using the ADXL362 interrup, but didn't really found the sweet spot I was looking for. I first want to have a proof of concept before trying to optimize it, but I already searched that topic.

I want to power to output while moving, especially during long rides ever straight soft ones. I did many test drives and tuned my code accordingly. I have a satisfactory sketch right now (it works as intended, even if a bit hackish), but there's room for improvement (that's partially why I left the processing on the arduino instead of offloading this par to the accelerometer)

I thought the LM7805+Caps were enough to provide a safe power source to the Arduino, I really lack knowledge in the power department, I'll try to document myself on this topic, but there's a lot I don't know.

The on-board regulator of the pro mini is rated 12V tops, and a car battery can exceed this easily. using a LM7805 permits to lower the voltage to a much bearable 5V first. I prefer to heat the LM7805 than the arduino board

The wires already run into my car where I want them, so I didn't even try to me a wire.


Again, thank you for your answers and questions, it points me in a few directions I didn't thought about.

By pixelk -  Wed Mar 12, 2014 12:06 am
-  Wed Mar 12, 2014 12:06 am #169302
Woaw, thank you so much for telling me about this, I must be really lucky not to have fried anything during my test runs.
I'm getting a few of those zeners right now.
I didn't even know about this kind of transient voltage suppressors so far. That's the pitfall of only mucking around in regulated voltage world, the real world can be dangerous